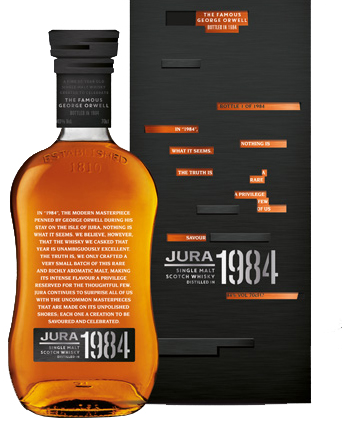 Last year as Winter began to crank up, a strange presence appeared online. Twitter grew dark with strange and cryptic messages. The [REDACTED] was evident and soon [REDACTED] became clear.

Jura launched an extremely limited edition thirty year old expression, matured in some fantastically decadent sherry casks. This expression was in celebration of George Orwell’s masterpiece, “1984”, the dystopian novel in which Big Brother is always watching.

The book itself was written by Orwell in the 1940s while he enjoyed the tranquility and isolation of living on the Isle of Jura, an island less than half the area of Greater Manchester where there are 35 wild deer per permanent resident(!).*

The bottling itself is gorgeously presented with reference and homage to the author and the text itself. The sample itself came similarly adorned:

Not your typical sherry bomb – there’s clearly a lot of cask influence but the sherry hasn’t imparted chocolatey/nutty notes; it’s much more a wine-laden affair with floral and herby high notes, complemented by the oak spice of thirty years in the barrel.

Rich, comforting, satisfying and different enough to be interesting without being weird or unbalanced.

This bottling retails for around £650 on WhiskyExchange. Thanks very much to Jura for the sample!

* In spite of a brush with death in the Corryvreckan whirlpool to the North of the island, Orwell completed his work and published it in 1949.