I was wandering around the local Booths the other day, and what should I see on the shelves but the Islay Barley releases of Port Charlotte and Octomore! In a bloody supermarket, no less. Well played, Booths, well-played.

And, as if I need any more excuse to taste a pair of whiskies from those progressive folks on the shores of Loch Indaal…

Bruichladdich have made a big deal of “terroir” for a number of years, and have already had several Islay barley releases of their unpeated spirit on the market for some time. There’s already a Scottish Barley release for Port Charlotte and Octomore, but now we finally have versions of each using only barley grown on Islay itself.

Terroir is a French word with no direct English translation. Essentially, it means “from the earth” and describes the unique character that a place imparts on a wine, a cheese, a whisky, or any other organic creation.

The Port Charlotte is a vatting of spirit produced with barley from several farms on the island; the Octomore is the ultimate expression in terroir, having been grown in a single field (“Lorgba”, if you must know) on Farmer James Brown’s farm, Octomore (after which the whisky itself is named).

At this point, I have to mention that in-spite of being made with 100% Islay barley that was mashed, distilled, matured and bottled on Islay – the barley did make a brief trip to the mainland to be malted and smoked. I expected it to have been done at the Port Ellen maltings, but apparently not. So, the accolade for the whisky that’s 100% made (from seed to bottle) on Islay still sits with Kilchoman for their 100% Islay bottlings.

Oh well, as I’m sure NASA like to remind people: being first isn’t everything. I’m pretty sure nobody else has ever released a whisky that can trace its origins back to a single field!

This is a 6-year-old Port Charlotte, though it’s not officially age-statemented on the bottle.

Like other distilleries of late, the marketing department seeks to make the packaging as attractive to new drinkers as possible so the age isn’t in evidence (perceived as a bit alienating and old-man-ish). Bruichladdich are usually very forthcoming on the details for their whiskies*, though, so there’s no secret about when it was distilled or when it was bottled – you just have to do the maths yourself.

Seems a fair compromise to me. And, let’s be honest, the tin and bottle do look fantastic. Time to drink!

I really like this. This is a tasty PC bottling with enough going on with the nose and palate to contend with the flavour of bottlings that are twice its age. No fancy wine finishes, either, just straight-up ex-Bourbon barrels for that clean, maritime, peaty profile around a buttery, slightly-citrus core spirit. 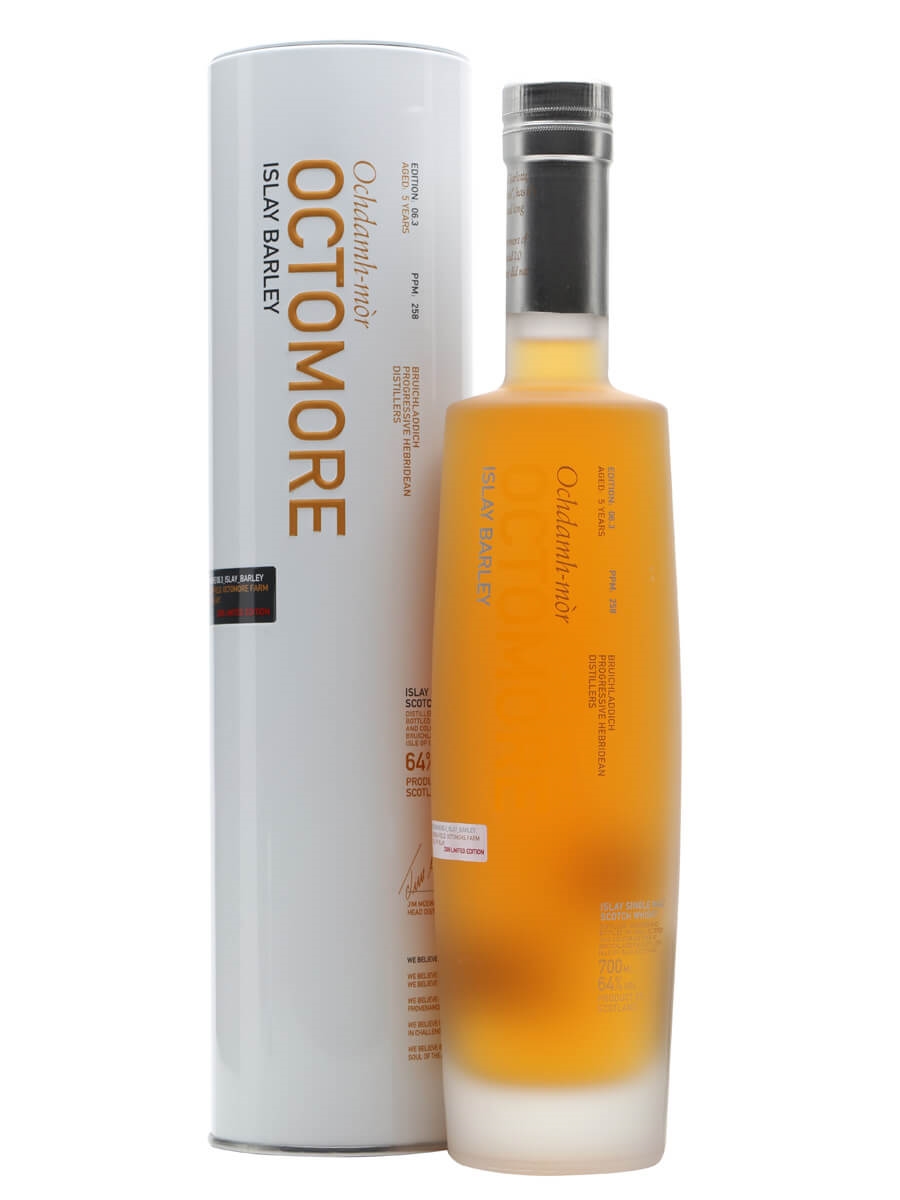 Quite dark in the glass for a five-year-old. Thick line of oil sticks on swirling. At 64%, this is serious stuff!

Octomore releases always push the limit when it comes to peating levels but this is a whopper even compared to others in the range. Typical peating levels are 167 parts of phenol per million – this release weighs in at 258PPPM!

Nose: Savoury, cooked meats, sweet Summer hay, sea spray, thyme and lavender. Quite grassy, and nowhere near as phenolic as you’d expect for such an intensely peated malt.

Palate: Very malty to start. Intense medicinal rush, calms down to reveal a little barbecued banana. Lots of deep, earthy, vegetal and herby notes among the peat. There are sweeter, raisiny, chocolatey, coffee notes in there too – odd since I don’t think the spirit’s seen the inside of a sherry barrel.

Phwoar. This is going down beautifully… It’s comforting, but fierce. Earthy, but sweet too. So many outdoor notes of herbal vegetation – you can nose it for hours and still find more character appearing.

Love the frosted glass on the bottle, too. It harks back to Octomore 04.2, “Comus”, and looks… well, sexy as all hell.

Not cheap at £130 in Booths, though online retailers seem to be pitching it at £145-£155 so it’s a decent saving and not exactly an order of magnitude more expensive than the Scottish Barley Octomore.

As usual, Laddie have made a a couple of honest, charming, thought-provoking drams that are a true snapshot of the place in which they’re created. I like the Port Charlotte more than the Scottish Barley release, and it’s definitely good value if you want an interesting peated dram.

The Octomore, though, is utterly glorious. So much going on in the glass, and devastatingly easy to drink even at full cask strength and with all that peat. Velvety, sweet, savoury, herbal, earthy and lip-smacking on the long finish.

I poured a glass for myself and my folks recently. My dad’s a huge peat freak so I knew he’d be intrigued, but my mother typically only goes for a nip of something mild and sweet. To my great surprise, she loved it, and asked for another dram! If that isn’t a rousing success, I don’t know what is…

I often wax lyrical about Bruichladdich but I have to say, hand on heart, the Islay Barley Octomore is the best Octomore I’ve ever tasted. Bravo!